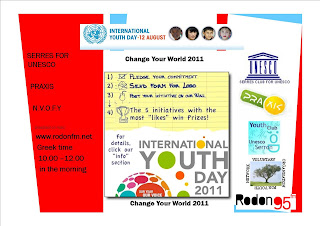 Young people at the launch of the International Year of Youth, celebrated annually on 12 August

12 August 2011 – The United Nations marked International Youth Day today under the slogan ‘Change Our World,’ with Secretary-General Ban Ki-moon underscoring the “stunning” role young people have played during the past year in overthrowing dictatorships. “Far too many of the world’s more than one billion young people lack the education, freedom and opportunities they deserve,” he said in a message. “Yet, despite these constraints – and in some cases because of them – young people are mobilizing in growing numbers to build a better future. Over the past year, they have achieved stunning results, overturning dictatorships and sending waves of hope across regions and around the world.”

Investments in young people will pay great dividends in a better future for all.

Citing their open minds and a keen awareness of emerging trends, and the energy, ideas and courage they bring to some of the most complex and important challenges facing the human family, Mr. Ban said young people “often understand better than older generations that we can transcend our religious and cultural differences in order to reach our shared goals.
“They are standing up for the rights of oppressed peoples, including those who suffer discrimination based on gender, race and sexual orientation,” he added. “They are confronting sensitive issues in order to stop the spread of HIV. And they are often the leading proponents of sustainability and green lifestyles.
He called on the international community to continue to work together to expand the horizons of opportunity for young people and answer their legitimate demands for dignity, development and decent work. “Failing to invest in our youth is a false economy,” he said. “Investments in young people will pay great dividends in a better future for all.”
UN Educational, Scientific and Cultural Organization (UNESCO) Irina Bokova also referred to the role young people have played in the recent overthrow of entrenched authoritarian regimes.
“The ‘youth quakes’ that have struck across the Arab world have shown the ability of young people to drive change,” she said in a message. “The struggle for democratic participation has shaken regimes seemingly impervious to pressure. These movements have shown the power of aspirations for human rights and fundamental freedoms.”
Ms. Bokova stressed quality education as the starting point for full and positive engagement by young people.
“We must provide young people with everything they need to share their ideas and act on them – to fight unemployment and poverty, to overcome gender inequality and all forms of discrimination, to tackle diseases and marginalization,” she added.
The Day marked the formal close of the International Year of Youth, which culminated last month with a high-level meeting on youth at the General Assembly.