Two days before the departure to Kaunas I had a 39oC fever. I was really sick and tired and I was about to cancel my participation to the program, because I thought I had no strength to work things out. So I left Athens in a strange mood, trying to persuade myself that it's only 12 days, that will pass fast. It happened indeed, these 12 days passed so fast but for a totally different reason. I had such a great time there, that not even a month was enough to make me feel tired! First of all it was all about the people. It was the first program I ever participated where I came so close with so many guys and girls. Normally, we need about a week to feel comfortable with each other -that means we have no time to enjoy it- but at Kaunas we were all mixed up since the 2nd or the 3rd day! I don't know if it was the weather that kept us inside or the personality of the people -I tend to believe that it is the second reason- but who cares after all! I strongly believe that we all received so much energy from each other that the whole experience will be unforgetable for each one of us. Secondly, it was about the project. We had to make a movie, about desisions we have to make in our lives, titled "Seconds of Life – What if..". Time was haunting us, I mean we had to write, act and film in a total of 10 days, when a normal movie needs about a year to finish! But we did it! Of course it's not a Steven Spielberg film but honestly -who cares! The majority of the participants was creative, everyone was coming up with a good idea or suggestion and we all co-operated so good that finally everything was done on time. In that point I want to thank all the people who helped me on writing the script for the movies (after all it was their ideas on paper) and of course Vilius and David, whose experience on filming made things easier! The most important, for me personally, was the fact that this whole idea made me discover more of myself – I never believed I could really act for example (even if I was no good at all doing it!). 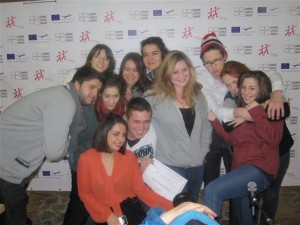 Lastly, it was all about the guys who organised the project. They were really willing to solve all the issues that came up during the program – especially Ignas, he was the man behind everything! I am sure that all this positive feedback they got from us will help them organise better projects in the future and of course, we will be the first to participate again!

I will really miss Kaunas, as much as this moment I miss all the special people I met up there – you know who you are.. I hope, that sometime in my life I will meet them again, even if that will happen in another project, or in their or in my country. Afterall what remains to someone are the memories and the short moments of joy that bring happiness to life.