Fare campain : How to talk about discrimintation in football in another country?

Praxis Greece / News / Fare campain : How to talk about discrimintation in football in another country?
30/03/2021 - News

Starting activities in a country that’s not familiar is not very easy. Especially when you arrive just after the campaign and take a project that’s already going on. How can we involve the local population when we just arrived in a country that we don’t know yet and to which we don’t speak the language? A few answers in the following article…

The best way to meet new people, especially for the campaigns is still a public space. Considering our lack of contacts in the city and the Covid situation, the street looked like a perfect idea for a place to meet people.

With the volunteers, we looked for images online that either symbolized racism in football or, on the opposite, solidarity and inclusion during football matches. Each one should be followed with a legend both in english and greek thanks to Biky’s translations.

The goal was to permit people to look at them at their own paths and then engage conversation on this topic with them. We also prepared leaflets both in greek and english for people who would not have much time to look because they were busy. For those who were interested we also proposed an experience of putting themselves in the shoes of players victims of racism by letting them listen to what actually happened during a match when a team was attacked verbally by the other team’s supporters because of the color of their skin.

With all these activities and a nice set up : panels from each side of the street, a stand that invites people to come and take a look and also a ball for people to play and pick their interest, we hoped that we would be able to connect with people in this country we didn’t know well yet.

People in Greece, and especially young one are curious by nature. The first thing I noticed during the time I spent in the office is, whenever there is a poster or writings in our windows, some people stop by to read and take a look at possible information. So the exhibition and having posters in the middle of this passing street in the center of Serrès could have a relatively important impact. Once people stop to read the posters and look at the pictures, this is the perfect opportunity to go meet people and start talking with them. At 10.30, when we were still installing people were starting to look at what we were preparing. Perfect! We got their attention. With our stand, leaflets, panels, our Virtual Reality Experience prepared on the computer, we expected to set some discussions or debates with people of Serrès or even some tourists considering that the touristic period was still ongoing.

The only brake for us was the language. Some people who were not comfortable with english were quite reluctant to talk with us but with Biki’s help and late Constantina’s and Nikos, we managed to reach them thanks to their translations and our leaflets that were written beforehand both in english and greek. Fortunately there were also young people who were able to speak english and were very interested and I even met french persons with whom i could discuss and present the project in french, totally unexpected!

For the 2h30 time that the panels were exposed in front of the theater, around 40-50 persons took time to discuss or at least left a few words while taking the leaflets we were distributing. In all the reactions were polar opposite. We had very interested and involved persons in human rights, difference and discrimination topic, but we also had the opposite reactions. Some people directly told us that they were racist when we tried to discuss with them. Very surprising but not totally unexpected since, as Greece is an entering country for refugees in Europe, some inhabitants show defiance for that. Debating and launching discussion is also accepting that there are opinions that we don’t consider good but still exist.

We can say that for a first experience of meeting a local community and organising an activity, the outcome is quite good and it gave us a good basis to work on and reflect to do better for the next campaign even if we already knew that covid situation wouldn’t make that easy for us.

Organising an activity is not limited to the D day. There is also the aftermath to manage and prepare. Especially on social media. By posting pictures of the event on Facebook and instagram we can reach far wider and get reactions from all around the world especially since all the volunteers tend to share them on their own profil so their friends can see them and know what they are doing in the projects.

We can then export our idea of discussing about difference, inclusion and racism issues in football by getting comments, likes or private messages from other people. And it also permits to show to Fare what we did at our scale for them to be able to connect every initiatives in the country and around the world to make it a bigger event than if we only organise one event on our own.

For me the work on this even : the exhibition truly ended when i finished editing the newsletter with pictures of FARE campaign and the exhibition in particular, leaving a footprint for the next volunteers to looks at to prepare the next Fare campaign! 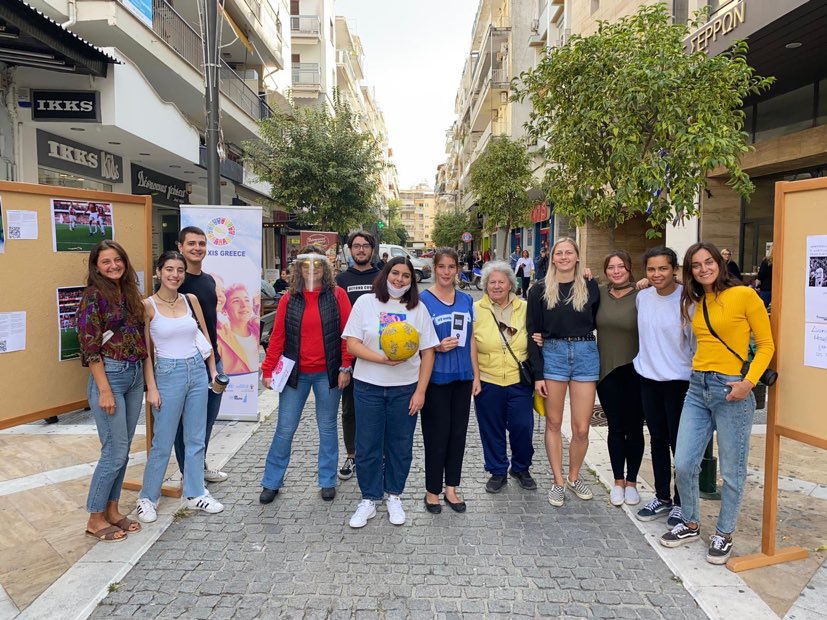 This article was written by Marianne Yotis, French Volunteer in Praxis Greece Organization