*This case study/report shows how we, as Praxis volunteers, created a photo exhibition for the FARE football campaign in October 2020. For one of our activities during FARE #footballpeople weeks we decided to have a photo exhibition showcasing racism in sports throughout the years.

The name of the activity was “Photo exhibition: #BLM - racism in sports”.

For this activity we needed photo stands, pins, a table, a chair, a computer, a pair of headphones (and sanitizing products for this), printed out pictures, posters and QR codes.

The working method we used was rather without any strict measures. We offered people to have a look at the photos on the photo stands, read about the history and meaning of each. We included some QR-codes, which people could scan on their phones and therefore reach a youtube video related to the topic. In addition, we also proposed the opportunity for hearing experience, where we displayed the racism that people in sports have to put up with during their performance. All in all, we had both visual and hearing experience. The participants had the chance to ask us for extra information and we also handed out leaflets for those passing by, who didn’t have time at the moment to stay and look at the stances as well as a brief overview of what we were doing there.

Our main purpose was to raise awareness within the locals about racism and especially in sports. It was important to showcase people that the racism that people face in sports has been going on for decades and it still continues to this day. We wanted to give the local people a chance to see the history of it and to explore on their own into it. As mentioned earlier we offered a hearing activity too, which consisted of racist slurs shouted at sports, for example football. So therefore, people could listen to how it feels like to perform in front of a racist public. It was also necessary to remind people that it still continues to this day, both in sports and in people’s everyday lives. We were expecting to create more awareness and expand their knowledge on this topic as well as being more aware when such situations happen and to speak up.

QR-codes, for printing the posters, for looking up the sounds for hearing activity, for

approached those who were already looking and advised them on questions they had.

During the photo exhibition we talked to the people passing by and gained insight on their perspective when it came to racism in sports. Since there were people from all ages, races and genders passing by we got to see many different points of views. We also asked some questions to see how aware they were about racism in sports prior to seeing our photo exhibition and what their thoughts were after seeing this.

The activity as an education tool. 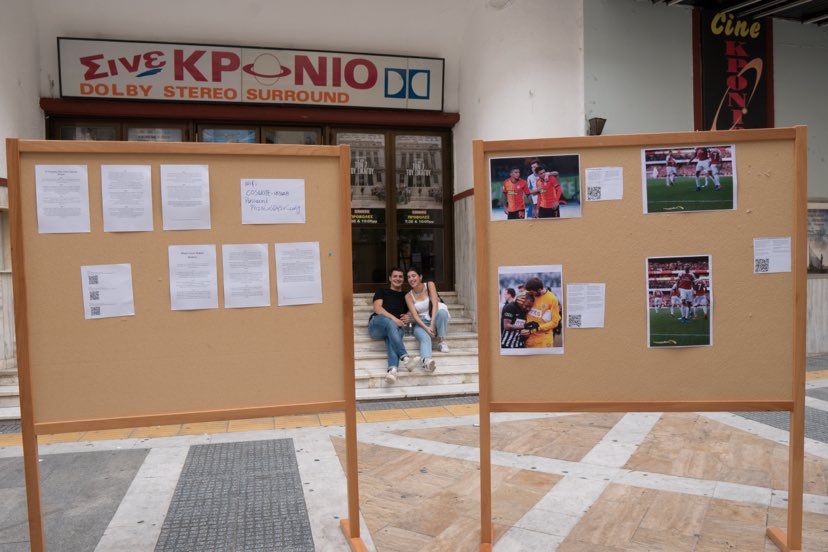 Possible alternatives: if it is not possible to do it outside then the same thing could be organized online. But it is more difficult to reach people this way and to see their immediate reaction and thoughts on the topic.

To get more personal with the participants another idea would be to have a workshop about it.

For example, a debate on the topic of racism. Or just a workshop talking about racism, where everybody gets to share their thoughts with others.

As one of the facilitators, I would say my role was pretty active. Me and another volunteer were the coordinators of this photo exhibition, meaning that we organized it all and planned out the whole thing. The only thing I would have changed is to share the tasks more in advance and to make sure that everybody knows what they are supposed to do. Time management is also something that we should have put more effort in.

Our target group were the locals of Serres. We didn’t have a certain age group in mind. Just the people passing by the theatre between the hours of 11AM and 3PM. We did know that the students finish their classes around 1-2PM so we were hoping to target more young people. In general, we welcomed all people from all ages and genders, and didn't have a set limit. Our goal was to raise awareness within as many people as possible and the more diverse target group the better. Since racism is something that still occurs in people’s lives it was important for us to spread the word to a large audience.

This idea we got from one of our mentors, since the year prior previous volunteers had also organized a photo exhibition. Also, we thought that visual representation catches more attention and therefore has more engagement.

When it came to spreading the word about our photo exhibition, we used various resources.

We started by printing out the posters and putting them up in local facilities- for example cafes, gyms, yoga studios etc. Therefore places, where a large variety of people go to and so that our exhibition could get as much coverage as possible. In addition, we posted the poster also on Praxis’ social media accounts and shared it to the other volunteers as well as the local volunteers, who engaged their own friends to this exhibition too. During the day of the photo exhibition our volunteers also handed out leaflets about the exhibition in the city centre.

When it comes to how we involved the participants into our activities, then Praxis’ volunteers all helped us out in putting together the photo exhibition and they all shared it on their social media channels too- therefore reaching out to their friends and families and raising more awareness within.

The people passing by and engaging in the photo exhibition are also considered participants in my opinion. We hope that after they saw the photo exhibition, they talked about it with their group of friends and family later and maybe even dived more into the research and searched up more information about racism in sports to get more knowledge. And in the future speak up about racism.

During the activity we gave the participants free will of exploring the photo exhibition by themselves. When needed we also offered to tell them more about the topic and share resources for more information. As mentioned above the participants had the chance to scan in QR-codes for videos too and listen to the audio records of racist sports audiences to give them a sense of what it is like to be in that position.

I would say that everything we offered for the participants worked very well, since there were many different ways for them to engage in the photo exhibition and learn more about the history of the “Black Lives Matter” movement as well as the history of racism in sports overall.

The benefits of working this way are that it is a more relaxed environment and people aren’t so pressurized. Meaning they can learn things at their own pace and in the order, they want to.

This article was written by Karolin Kasper, Estonian volunteer in Praxis Greece