This idea started three years ago, and it was about time to see how we will proceed. For that reason, after the first two training meetings in the Netherlands during the demanding period of pandemic, in October 2021 it was a good opportunity for all partners to meet so as to evaluate the progress of the program. Connectivity is a project, which was created and started to implement in a difficult time period on a worldwide level where the existing challenges were more than it may be expected.
In the meantime, having already organized the 2 training meetings, all partners have begun both to implement and practice the tools and methods they have learnt, and work on it through different activities. After these years and various events, it was important that all partners gather, assess the situation, find solutions to challenges or avoid future possible obstacles. Greece, and especially Serres, was the place which hosted us for these days.

Each partner organization was represented during this  mid-term meeting which lasted two days. One of the first things was to recapitulate all the basic points and facts that have been done until that time, so as all of us have a clear view of the project. Moreover, we reorganize up to an extent, the initial time schedule of the project due to social circumstances, so that the program will be effective.
At that point, it was very helpful and important for the next steps, the fact that we discussed the project with people that have been participating and were very active in previous events. Thus, their contribution was significant especially with regard to the evaluation of the program until that moment because we could approach the project from as many possible sides.

This meeting was a great chance to observe and focus on new goals and learning needs that participants could have, so as to be more specific and satisfy more peoples’ needs, regarding employability. Therefore, since we brought up some new ideas and set new targets, we separated into 4 different groups to work in teams, each one of them with a specific task which will be continued during the whole period of the project.
The teams will be involved with the Intellectual Outputs, the Assistance of the following event, the Social Media part and the Zoom meeting preparation. All of us started to work in teams and the main goal was either to plan and organize the next steps on those fields or work on them, in the case that something was already done. Of course, the aim was also for these teams to be enlarged as time passes with other members and participants of the project, so as a bigger part to be integrated and come closer to our desired result.

It all ended with confirming some of the future plans and by agreeing that we will have monthly Zoom meetings with participants as well. One reason for this was to help each other follow the procedure and motivate them more and more to be active and involved in the project so as to be more productive. These kinds of meetings are renewed until the completion of the project, with the purpose of the best possible attendance. 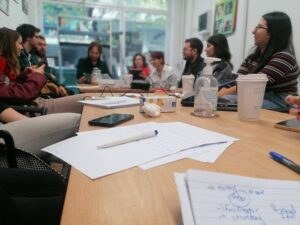 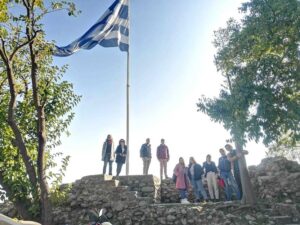